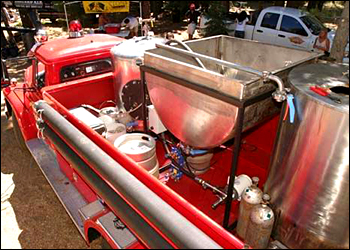 On a recent episode of the Discovery Channel’s Monster Garage (Episode 46), Jesse James and his posse of wild builders created a true dream machine. The Firetruck Brewery, a brewery on wheels capable of brewing and serving beer. When the nation’s most famous garage needed the vital components to make the dream into reality, they naturally turned to Jason, here at Ager Tank & Equipment.

Since the producers and builders had both a tight budget and a short timeline their choice of Ager Tank & Equipment was a no-brainer, since we are known throughout the industry for having high quality equipment at great prices. Given some specs by producers Jason hooked the producers of the show up with three high quality used components. Jason had to look no further than his own warehoused inventory to find the needed equipment. He procured for the project, a fermenter, boiler and mash tun needed to put the brewing into this mobile brewery.

Since Ager Tank & Equipment are experts in packing and shipping large equipment, Jason was able to deliver the equipment in time for the proposed start date.

The equipment while used was in very good condition and was easily adapted by the Monster Garage builders to the Firetruck assembly. A little cutting and welding and the tanks were in place and ready for rigging.

According to the show’s website “The Firetruck Brewery makes approximately six barrels of beer per batch and is capable of producing 156 barrels — which translates into 312 15.5-gallon kegs or 51,584 12-ounce bottles — per year. These production numbers are based on a six-barrel brew every two weeks.”